Before & After – Struggling with Paraphimosis 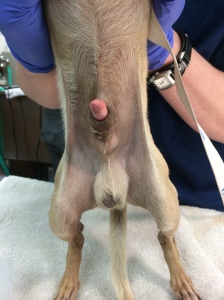 It’s an awkward problem. It’s also often misunderstood. Many people see a dog with paraphimosis (par′ă-fī-mō′sis) and think the dog is sexually aroused. While any male dog may normally (even without sexual arousal) extend his penis beyond the sheath or prepuce that normally covers his penis, the penis should be able to retract back within the prepuce and out of sight without any difficulty. When that doesn’t happen, we have a problem. Paraphimosis is the term we use when a dog’s penis is unable to fully retract back within the prepuce. The first paraphimosis case I cared for was a chihuahua. His penis was stuck outside of the prepuce, but fortunately it simply appeared dry. Some dogs with paraphimosis  may develop swelling, strangulation of the tissue, infection or necrosis. This dog was lucky. 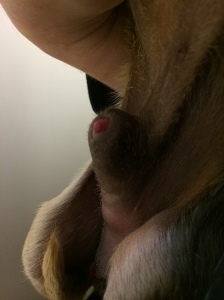 Upon evaluating a few surgical options, I elected to perform a phallopexy, which essentially involves anchoring the penis to the prepuce so that the penis will no longer protrude. The surgery, which was accompanied by a neuter, was uneventful and seemingly successful immediately after surgery. (See photo at right.) Unfortunately, as the days passed after the surgery was performed, we saw the little guy’s penis slowly start to make an appearance once again. Ultimately, the surgery was not successful. It was disappointing, but not everything we, as vets, try is guaranteed to work. I was ready to attempt the procedure again to see if I was able to achieve better success, but before I got a chance, the pup was rescued from the shelter. In the end, it was a happy ending for the little pup, despite our struggle with his paraphimosis.